As our company’s core competency, this technological capability lies at the heart of many market applications, and also answers the growing need for technically engineered material. Today, we are the world’s largest producer of Stitchbond fabrics. Our proprietary technology – bringing together combinations of materials — has already proven to have infinite possibilities.

Arno Wildeman began producing a Stitchbond nonwoven in 1968 in the United Kingdom and the first to commercialize its use in the West. In the early 1970s, he pursued the dramatic redesign of the original Mauersberger concept to incorporate new capabilities into the Stitchbond process. This new technology platform became the foundation of unique process capabilities that continue to evolve to this day at Tietex.

Stitchbond Nonwoven technology is a process that pierces through flexible substrates in the form of nonwovens, films, papers and foams (or combinations thereof) with a series of pointed needles positioned adjacent to each other. These needles then stitch either a simple or complex network of textile yarns into the substrate(s) to form textile/nonwoven hybrids for a broad array of applications. The stitching either strengthens or reinforces substrates, or brings an extensive number of alternative properties to the resulting composites. 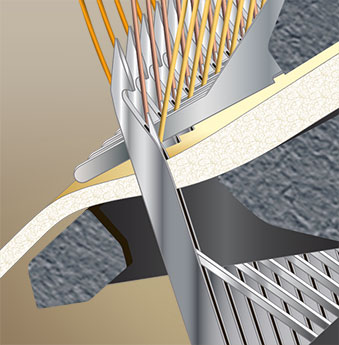